The postcard views below come from the period 1904 to 1914 and have been provided by Mary Harding.  They show a number of interesting changes! 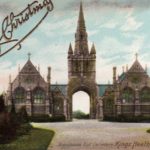 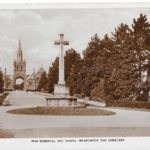 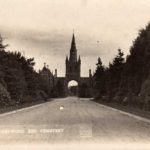 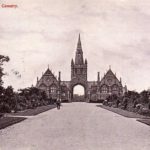 After many years, in 2012, it appeared that Birmingham City Council had at last agreed to back a bid to Heritage Lottery for funding to restore/repair these magnificent chapels but due to the announcement of ‘austerity measures’ in the City- this offer was subsequently withdrawn.

Two chapels (listed grade II) situated at the highest point in the grounds, in the centre of a carriage turn, provide the centrepiece of the cemetery layout. The twin chapels, linked by a central porte-cochère, were designed by J Brewin Holmes, a local Moseley architect, in a Gothic style and constructed from red brick and terracotta. Above the central porte-cochère rises a spire in red terracotta. The western chapel was for Anglicans, the eastern one for Nonconformists. A blaze severely damaged the latter and since its formation the Friends have helped raise funding to have the buildings made safe in the hope that this would lead to restoration/renovation. To date everyone concerned has struggled to find a viable  use for the chapel buildings in their cemetery situation, that would guarantee future funding for upkeep etc.

At this time we are working with BCC Bereavement Services and local Councillors to try and resolve this situation and hope to come to a successful resolution that fulfils their requirements whilst also protecting these beautiful historic buildings. Recently BCC have undertaken major roofing works to help make the building safe.  In May 2019 a new temporary roof was erected on the East chapel, brickwork was stabilised and shrubbery cut back- in an effort to improve the look of the buildings and slow deterioration until a suitable self sustaining solution can be agreed on by all parties involved.

In 2020  we were pleased to see the removal of window boards on two sides of the building and their replacement with Perspex. This meant that daylight flooded into the interiors and staff were able to  remove debris and sweep the areas clean.  The original builders fence was removed and new more appropriate fencing was installed. To coincide with visits from local Cabinet Members and Councillors a new interpretation board was also sited by the chapel building to record its history.

We hope this will be the start of a number of improvements.