Skip to content
As part of National Cemeteries week the Friends will be sharing some of our research that we have gathered over many years. A good place to start will be the first burial in Brandwood End, then a new cemetery in Kings Norton district.
Charles Downes – 5 years old – first burial in Brandwood End.
Grave 1 Section C1 C/E.
The cause of death was ‘Diphtheria 4 days’
His father, Walter William Downes was a Carpenter (journeyman) who was present at his little son’s death at 47 Runcorn Road, Balsall Heath on Tuesday 11th April 1899. Charles was buried four days later on Saturday 15th April.
The minister who conducted the burial service was Revd Charles William Barnard Vicar of St. Nicolas’ Kings Norton (1893-1909) in whose parish the Cemetery lay.
Brandwood End Cemetery was officially opened – there is a plaque on the West Chapel (CoE) – on Thursday 13thApril 1899 by Mr. George Tallis, the Chairman of the Kings Norton Parish Council Local Cemetery Committee. 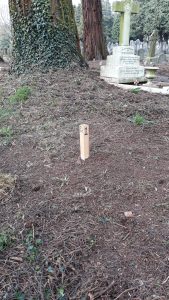 Charles Downes grave is on the edge of the right hand public grave area and marked with a plain stake(Close to the Cross of Sacrifice). Bereavement staff have now placed a small plaque adjacent to the marker.