THURSDAY 27TH JANUARY IS A DATE FOR QUIET REFLECTION.

There will be a commemoration event at Millennium Point on Sunday 20th.

Birmingham’s annual civic commemoration of Holocaust Memorial Day will be hosted at Millennium Point next week.

The Lord Mayor of Birmingham, Cllr Muhammad Afzal, will lead the event on Sunday (30 January 2022) which this year has the theme of One Day. The event is free, open to all and starts at 2pm.

Holocaust Memorial Day commemorates the victims and survivors of the Holocaust and Nazi persecutions, as well as other genocides around the world.

One Day is the theme for this year’s event, in the hope there may be one day in the future with no genocide. It is also an opportunity to learn more about the past, empathise with others today and take action for a better future.

This year’s programme will feature a candle-lighting ceremony as well as testimony from Mindu Hornick MBE, who will talk about her experiences as a Holocaust survivor, plus performances from violinist Simone Schehtman, Birmingham’s Young Poet Laureate Fatma Mohiuddin and the city council’s choir.

Lord Mayor of Birmingham, Cllr Muhammad Afzal, said: “Holocaust Memorial Day is an opportunity for everyone to pause, reflect and learn lessons from the past and apply them to the present day, to create a safer, better future.

“This year we will be able to come together to light a candle and remember victims of atrocities and genocides around the world, as well as those who are still sadly losing their lives through war, conflict and hate crime. I hope as many people as possible will join us Millennium Point on 30 January.”

Cllr John Cotton, Cabinet Member for Social Inclusion, Community Safety and Equalities at Birmingham City Council, will be hosting the event and give a short speech.

This event will also be recorded and shared via the city council’s social media accounts afterwards.

AVIAN FLU- Just a warning to everyone that this is now in the area and has been spotted in the Canada Goose population at Cannon Hill Park. Notices are now up at our adjacent Brandwood Pool. It is not an issue for humans but you are warned that you must not touch any dead birds that you find, or their bedding etc. There are more details via the link below or on the RSPCA or Birmingham.gov.uk sites

It is suspected that Badgers from a local sett have been venturing into the cemetery. They are beautiful creatures but can cause untold damage to graves and lawned areas which would cause great distress to bereaved families, as well as costing a lot to rectify.

If you see a Badger within the cemetery can you note the area and the time and let us know via a message or email. The most likely time to spot them will be early morning and late afternoon (at dusk) but if you live backing onto the cemetery you may spot them at other times. Photographs would be very interesting as well.

The Ranger service and local residents have been aware of several large setts locally so hopefully they are just foraging and not looking for a new home!

Just a reminder that dogs are not allowed in the cemetery. We have several reports that people are visiting early in the morning and allowing their dogs to run free. This is not really appropriate in a cemetery and we would direct you to the extensive local parks surrounding Brandwood End. Jasmin Fields Nature Reserve is literally across Broad Lane and there is the canal tow path and Brandwood Sports field nearby.

Can we also advise the person who arrives daily by car and drives to the farthest point to then let his dog out loose, but waits in the warmth of his car, that several local people have reported your registration to Bereavement staff. Dogs running loose around graves and grave stones is not an acceptable practice and causes distress to those with loved ones buried in the cemetery.

We are so glad that so many people view our web site but can we remind you that, if you are a Facebook user, you can also keep up with what is happening in the cemetery via our site. (You do have to be a member of Facebook to access it.)

The asset to our Facebook site is that followers are able to interact directly, message, comment and also post their beautiful photographs of the cemetery.  Many people have smart phones now so can input items of interest immediately.

These are a few of the latest photographs and thankyou Gary and Michelle for sharing them. 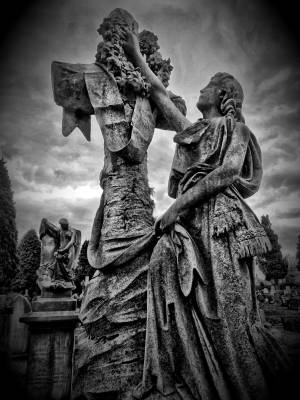 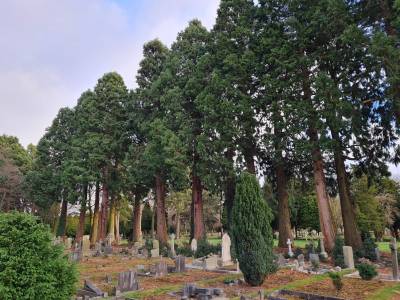 On behalf of the committee of the Friends can we wish you all Seasons Greetings. We do hope that you all managed to connect with friends and loved ones in these strange times on what for most people is a special day.

Can we remind you that there is a change in opening times on Christmas Day and Boxing Day and the Cemetery will close at 1.30pm on both days. We recommend that you do check the BCC site link below to check there have been no changes.

On December 14th many members and followers of FBEC said a sad farewell to Anne Courbet, who was instrumental in forming the Friends.  Anne had been a wonderful inspiration to all of the committee and also to anyone who had a love for the cemetery. She will be sadly missed. Her funeral was well attended, as was her joyful gathering at Kings Heath Cricket club afterwards, with happy memories .

Rest in Peace Anne. As long as the Friends exist you will never be forgotten in Brandwood End.

I noticed this evening that the newly tarmaced section from Woodthorpe road to the cemetery gates has now been fully completed with its yellow lines.  The parking of vehicles on this narrow access road has created a real challenge for lengthy herses, following vehicles and horse drawn carriages – so hopefully this will resolve the problem.