Munjac Deer have been making themselves known in and around the area of the cemetery and the pool. They were heard more than seen a lot in the past, but sightings have been rare of late. The deer you can see in the picture below is a Roe deer and is considerably larger with a longer neck and a distinctive white rump- but several years ago one of these was spotted and photographed in the cemetery by Dean our Ranger. How it got there, we have no idea but it is unlikely we will see one again! (The female does not have the antlers that appear here) 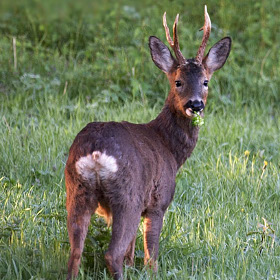 The Muntjac is much smaller, similar size to a Labrador dog, and can be recognised in the cemetery at night by it’s distinctive single ‘bark’. In the last week there have been close encounters during daylight with one by Brandwood Pool and also in the cemetery. Wildlife is enjoying lockdown, with reduced footfall making them more inclined to be about in daylight hours in this relatively urban area. Lets hope someone can get a photo of one ……but they are very quick!