Councillor Barry Henley, on behalf of Birmingham City Council, joined Brian Rai of FBEC to lay wreaths at the Cross of Sacrifice in Brandwood End Cemetery. This year our Remembrance Sunday event actually fell on the 11th of November and our short ceremony took place at 11am to include a 2 minutes silence. They were joined by a number of members of the public and members of the Friends. 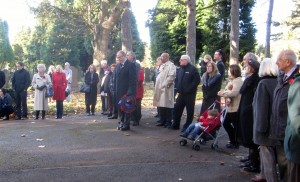