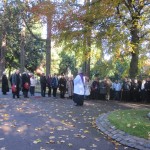 The Deacon of St Dunstans Church, David Fairbotham, led a short but poignant service.  Following this wreaths were laid on behalf of Birmingham City Council and its Citizens, Kings Heath Branch of The Masons and the Friends of Brandwood End Cemetery. 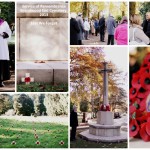 This year we had not one but two buglers who performed the Last Post beautifully.  Two minutes silence was observed and this, along with the buglers, brought tears to the eyes of many of the people attending.

Many of the visitors stopped behind to ask about the cemetery and the work the Friends are doing.