We were so sad to have to cancel our normal Remembrance Day Service but were heartened to see so many people throughout the day stopping to pay their respects at the Cross of Sacrifice. 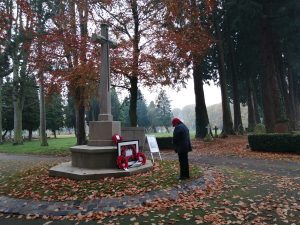 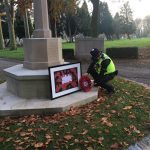 Members of our committee laid wreaths at the Cross and also at the WW1 Memorial. Their wreaths were joined by those of the West Midlands Police Force, The Catholic Womens League and a tribute from the local community. There are still other wreaths to be laid later today but we think that , between us all, we have shown that the community as a whole pulled together to make Remembrance Sunday an ‘event’ despite these strange times. Thank you all. We also welcomed Ian Binnie to the cemetery today who was visiting to lay a wreath on behalf of the Gallipoli Association and the Yeomanry Museum based in Warwick.  It was destined for the grave of  Private Horace George Turner – Service No. 2244 who lost his life in Souvla  Bay.