Skip to content
Since its opening in 1899 Brandwood End Cemetery has been a place of burial and remembrance for over 350 souls lost as a result of enemy action. Many are remembered under the ‘Commonwealth War Graves’ umbrella but many lie in family graves. During the Blitz hundreds of civilians lost their lives in the City and Brandwood End is the resting place of many of those. Our Civilian Garden of Remembrance is a peaceful place dedicated especially to those civilians. We have reproduced below a ‘post’ that the CWWGC featured on their site as a record of the event. 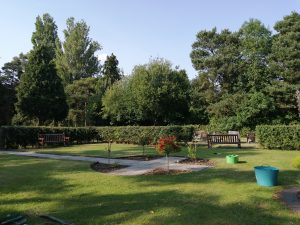 On the 11th December, 1940, the residents of Birmingham appeared from their air raid shelters after suffering the longest raid of the Blitz.
For 13 hours the city was pounded by hundreds of German bombers, with over 150 civilians killed. They are commemorated by the Commonwealth War Graves Commission in the Civilian War Dead Roll of Honour located near St. George’s Chapel in Westminster Abbey in London.
#WeAreCWGC
Can we also refer you to the web site of Birmingham Air Raid Association.