Did you know that today is 100 years since the formation of the Royal British Legion? We have to admit that it had passed FBEC by ! Over the years the Friends have had a strong connection with the RBL and our work around the War Graves in Brandwood End. Kings Heath Branch, and later Kings Norton Branch, have supported us at our Remembrance Day events and other projects. Unfortunately these branches are no longer available to assist and their Standard Bearers are not seen at Remembrance anymore. We really miss them. 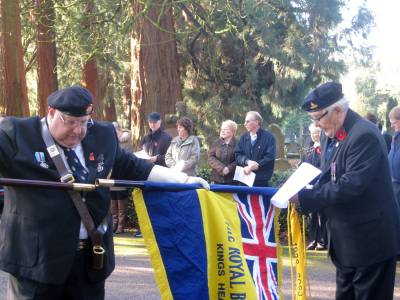 It is 100 years today since the RBL was formed, and it continues to do its good work. We recognise that it has to move forward to remain relevant but as well as remembering those who lost their lives in battle or need their support following involvement in more recent conflict- please spare a thought for all those ‘ordinary’ men and women who have worked as volunteers over the years. They have shaken tins, stood in the rain, manned stalls, delivered poppy crosses, arranged Remembrance Services and generally raised the profile whilst raising the funds that have enable the RBL to do the work they do.

Many of these stalwarts have died as age was against them. As newer younger people take up the baton lets not forget the work of those that went before, because without that army of volunteers today’s generation would not know who the Royal British Legion are or what they stand for.