Regular visitors to Brandwood End are aware that we have a large number of Commonwealth War Graves but for some unknown reason a small number are placed together in an area in Section 33. We have tried, as have Bereavement Services staff, to find the reason why these flyers have been buried together, when all the other  CWGC recognised graves are scattered throughout the cemetery. We are all unable to find any tie between them. 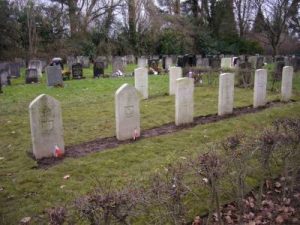 Following a recent visit from a representative of CWGC it was decided that the site needed to be refreshed, and we reported on the start of this work. This is an update and the turf is now in place. We suspect that not much will happen now until this turf has bedded in, but perennial planting should follow and continued maintenance by CWGC gardening staff.