Those of you that follow our blog may remember some time ago that Barrie Simpson (FBEC Committee member) was assisting Paul Ford from Wyrleyblog to try and trace the grave of a WW1 servicemen, Thomas James. After a long search Barrie was able to inform Paul that a grave had been located!

With Paul’s permission The Friends contacted the Commonwealth War Graves Commission. Barrie, as well as being a member of The Friends committee, is also a CWGC Volunteer and, under the ‘Adopt a Grave’ scheme , he has adopted all 200+ CWGC graves and was most anxious to assist Paul’s splendid research. It was hoped that the end result might be the erection of a CWGC headstone for this Coal Miner from Great Wryley. 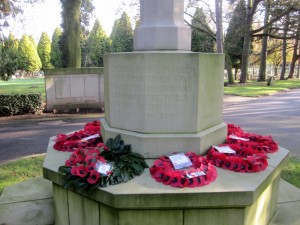 The evidence was duly submitted, by Barrie, to the Ministry of Defence for consideration by the ‘War Grave Adjudication Team’. The response below has now been received.

‘Dear Mr Simpson,
We have recently been instructed by the relevant Service Authority that Private Thomas William James qualifies for commemoration as a Commonwealth war casualty.’

Barrie adds that:
‘Now, I move on to the next phase of pestering the City Bereavements Department to provide with me the letter that there is no known owner of the grave so I can begin the final phase to get a CWGC headstone erected on Thomas’ grave before November 2015.’ His grave will be recognised, along with 200+ others, by the Friends and the placing of a Poppy Cross in November 2015.