FBEC felt they would like to share with you an article prepared by Edwina Rees, for the Moseley History Society newsletter. It sums up our recent Remembrance Day Event. Thank you Edwina. 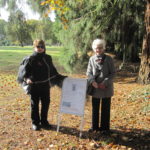 The centenary year of the Battle of the Somme was very much in everyone’s thoughts, in this year’s commemorative service held at the Cross of Sacrifice at Brandwood End Cemetery.  Before the laying of wreaths, the last post rang out and during the two minutes silence, instead of poppies, the last golden leaves of autumn fell on the heads of those reflecting on the loss of the many young men who fell that fell during the course of the war in 1916.

Second Lieutenant F C Alabaster was one of those who lost their lives that year. Clifford, as he preferred to be known, was wounded in the head by shrapnel, just before the Battle of the Somme, but the protection afforded by the new ‘Brodie’ helmets lessened the impact and he was expected to survive. Unfortunately, this was not the case and he died in the Empire Hospital for Officers, London just over a month later. His great niece Wendy Alabaster represented the family on the day

His grave and those of others buried here who served in WW1, are now recognised by the Commonwealth War Graves Commission thanks to the campaigning endeavors of the Friends of Brandwood End Cemetery. He is also commemorated at St Mary’s Church, Moseley on their WW1 memorial. 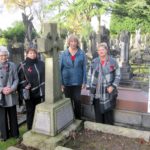 Second Lieutenant F C Alabaster was highlighted at the request of the Commonwealth War Grave Commission as part of their ‘Living  Memories’ project, but in remembering him we must also remember all those who are buried here or on foreign soil who gave their lives for their country and those killed locally as a result of enemy air raids.