2020 is a special year for Brandwood End, as it is 90 years since the dedication of the Cross of Sacrifice. Our Chairman has researched its history and we hope you find this shortened version of events of interest.

At 3pm on Sunday 20th July 1930 the Cross, erected by the Imperial War Graves Commission to the memory of the 103 (at the time) soldiers who died during the Great War and who were buried in the Cemetery, was dedicated by Birmingham’s Assistant Bishop Hamilton Baynes, who during the Boer War was Bishop of Natal (and an Army Chaplain both then and again in WW1). 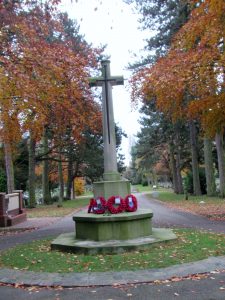 The event was extremely well attended, despite the continuous downpour that had drenched Birmingham for two days, with the Lord Mayor Alderman M Lancaster, Councillor F. McDonald Chairman of the Parks and Cemeteries Committee, Councillors, representatives of the local TA Units, members of numerous branches of the British Legion (with their banners), the Vicars of Kings Norton and All Saints Kings Heath and other clergy all present and led to the Cross by the military band of The Legion of Frontiersmen. A large number of the public attended, many of whom carried wreaths and bunches of flowers to place on the Cross and the Lord Mayor laid ‘a massive wreath “from the Lord Mayor, Aldermen and Citizens of Birmingham” . 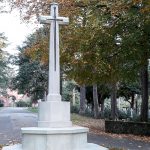 We are pleased to report that the Cross and Screen walls have been cleaned in time for this special date and on the 20th the Friends will lay a small wreath to mark this date, which coincides with the 15th Anniversary of the formation of the Friends on the 21st July 2005.