Over 100 years the Poppy has evolved but remains an enduring symbol of Remembrance and hope for a peaceful future. 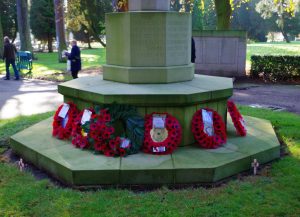 Red poppies have been worn as a show of support for the Armed Forces community since the formation of The Poppy Factory in 1922.  The Charity was founded by Major George Howson MC, a British Army officer who was awarded the Military Cross in 1917. George Howson’s vision was to provide employment for veterans injured during the First World War.:

The Royal British Legion wanted to buy Remembrance poppies made in Britain and George Howson proposed that the poppies should be made by disabled war veterans in the United Kingdom.   The Legion agreed and in May 1922 it gave Howson £2,000 to establish a poppy making factory.

In a normal year, 40,000 collectors with tins sell more than 35million poppies and raise around £50million for the British Legion charity.

100 years of history – The Poppy Factory it