Many men fell at the Battle of Passchendaele, which is especially remembered this week for it is 100 years since that bloody conflict. As a small part of this, The Friends of Brandwood End have been encouraged to research graves to highlight at least one of those Soldiers. We were looking for a casualty who was returned to England wounded, but subsequently died and was buried in Brandwood End.  Research by Doug Smith and Julia Griffin found us William Shakespeare (Obviously not the one of normal fame). 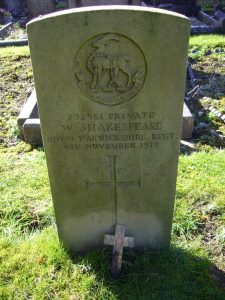 William was born in Birmingham in 1882.   His mother and father both worked for Parkinson Cowan and were gas meter makers.   He left Mary Street Board School when he was 12 in 1894 and went into the trade as well.

William married in December 1903 when he was 23 to Elizabeth Chambers who was just 18.   They lived in a back to back in Wrentham Street.

William and Elizabeth had several children. William and Nellie in 1906 – twins!   Unfortunately William was sickly and died. Next came Alice and then George, in 1912.  The family then moved to Lime Grove, Walter Street, Nechells.

The news from the Front was bad so William enlisted in June 1915 and was accepted in the 16th Warwickshire Regiment, or the 3rd Birmingham Pals.

He fought in the many battles in 1917 but was hit by a shell burst at the Third Ypres battle, or Passchendaele.   His Battalion were ordered to take the Polderhoek Chateau with the 2nd Norfolk’s and began the attack on 9th October 1917.   Many men were lost.

William was brought back on a stretcher having been injured by a shell burst as they retreated.    When we got back to England he was sent to Dewsbury in Yorkshire but never recovered from his wounds. Elizabeth was nearly full term with their final baby, John, who was born the week after William died, aged 35 on 6th November 1917.

Thank you to all those that stopped to hear about William as they passed through the Cemetery today and also those who remained behind after our Remembrance Service to hear about his life and others who fought at Passchendaele. The information will remain on display in our Notice Boards.