Not quite a ‘brick’ but certainly- in the wall…of the chapels.

We have Mark Brady of STONESET MEMORIAL MASONS to thank for bringing this foundation stone back to its original condition. Over the last 121 years the writing had become indistinct and difficult to read. Mark undertook this work as a ‘labour of love’ and I am sure you will agree that it now cuts a dash on the chapel wall. This view enables everyone to see how excited the Friends are at the quality of the temporary roof, recently installed by the City Council contractors. Both chapels are now weatherproof and this represents a huge step forward. 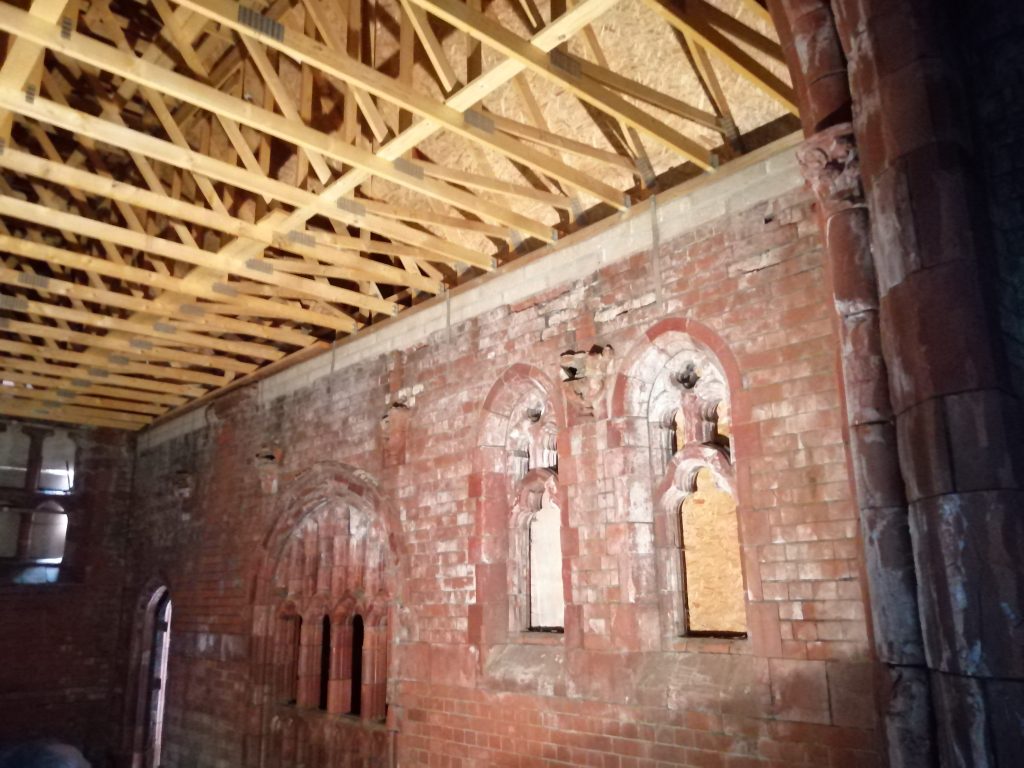 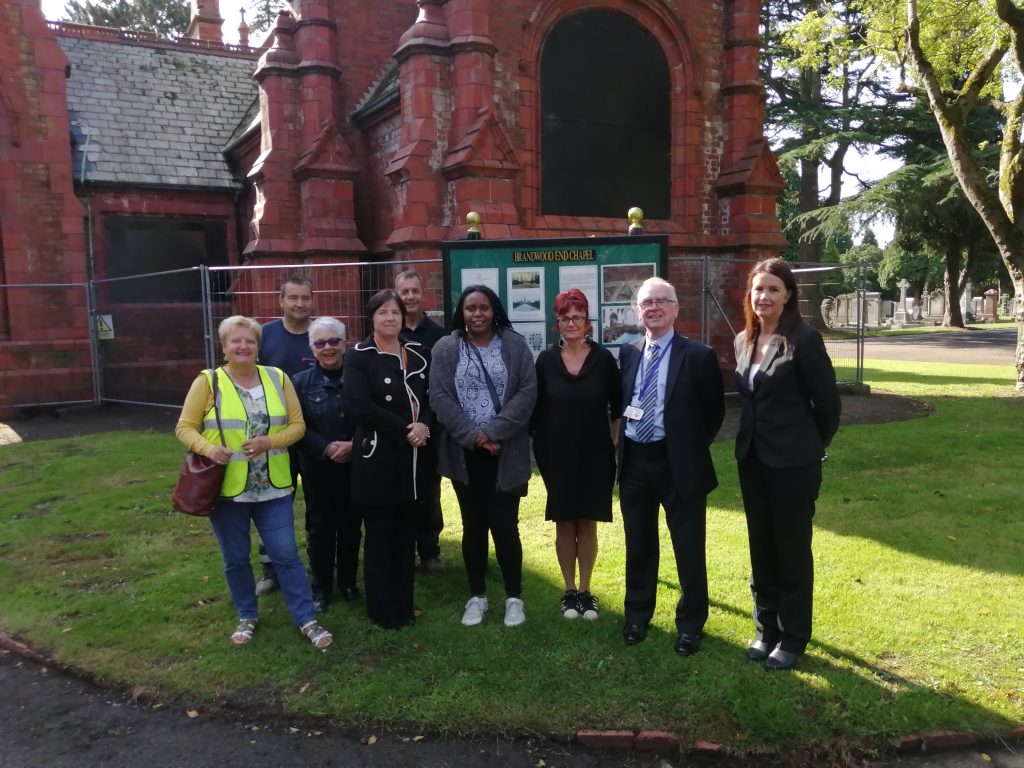 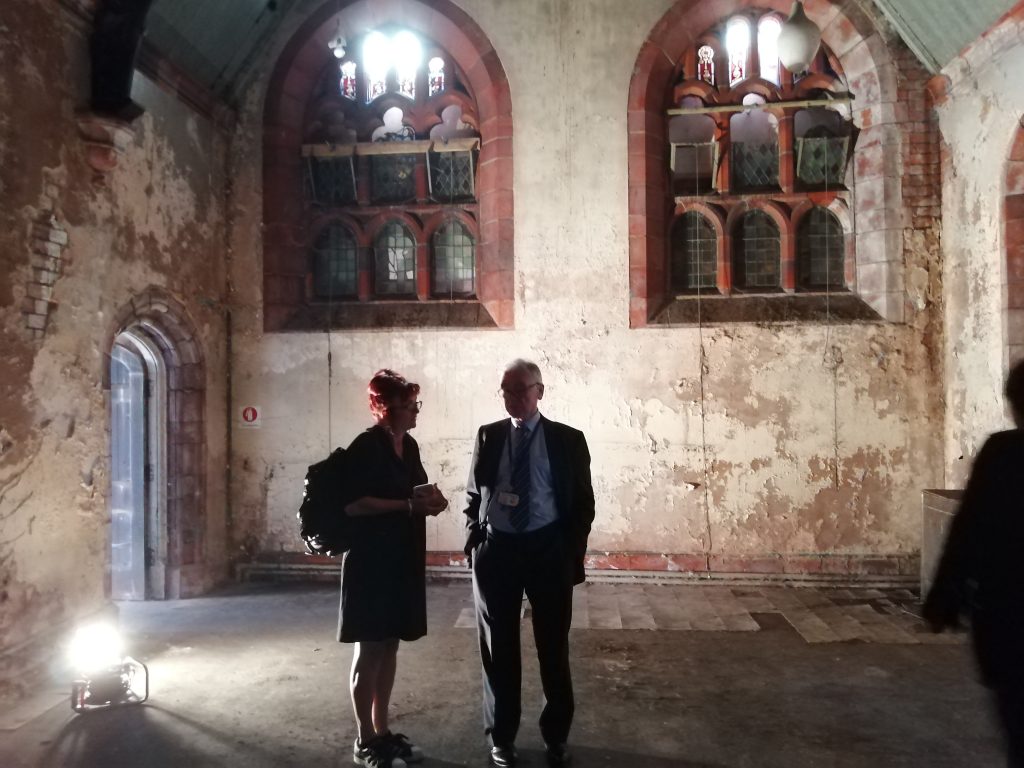 Our thanks to a local drone operator who shared these magical views with us. 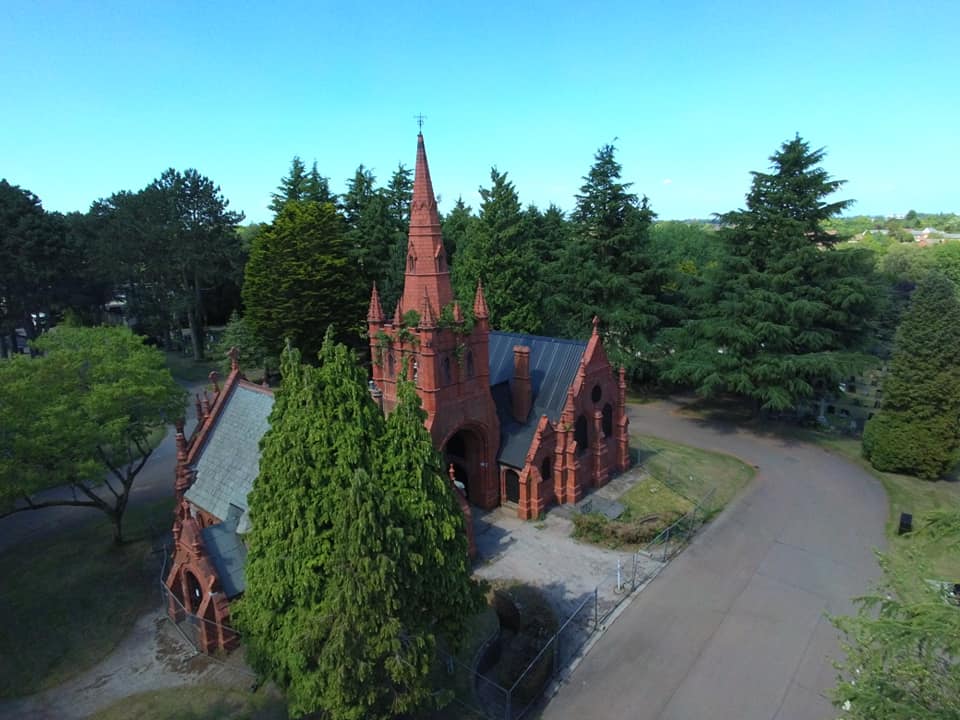 In the following higher shot you are able to get a small insight into the amazing trees within Brandwood End. We are hoping to arrange a walk around the cemetery with Dean, our local Ranger but as local people will know- their time is very much at a premium. I hope the residents of Kings Heath realise the amazing green space that sits quietly on their doorstep. Luckily for us, the local wildlife are well aware of their opportunities and the cemetery is home to Muntjac deer, Foxes, Hedgehogs, Squirrels,Woodpeckers, Owls, birds of prey……….and many species of familiar birds. The chapels are being included in a visit by the Cabinet Member to Brandwood End next week.

Councillor Sharon Thompson has responsibility of Cemeteries and Crematoria in her portfolio and seems to be making a point of visiting all of the sites.

The Friends are looking forward to getting a second chance to have a look inside the Chapel buildings following a make safe and roofing project. We know its a mess inside, but at least now it is a dry, waterproof, pigeon proof mess!! Hopefully the Cabinet Member will be joining us and we are interested in her thoughts.

The eagle eyed amongst you, who read our article headed ‘Chapel news gets better and better’ will have spotted that everyone was standing in front of a new display board!

We were overjoyed when we were asked to provide content for a new ‘Interpretation Board’, to be installed in front of the chapel buildings. This has given everyone involved the opportunity to pass information about the chapels and their future to the public in general- especially those who do not use the internet and therefore are unable to view this web site or our facebook page.

The Friends were delighted to be invited, by Bereavement Service staff, to join them on a rare opportunity to actually get inside the chapels !

They were joined by City Council officials, eager to view the newly fitted temporary roof and inspect the work already done. Everyone agreed that the visit had been well worth while and it stirred enthusiasm all round, that these magnificent buildings should not be allowed to deteriorate further. This is the present stance of BCC . Those present included-  Alison Fumagalli (BCC Registrar / South) Bev Nash (BCC Registrar North) Andy King (BCC Principal Building Surveyor Building Consultancy Acivico) Coral Howard FBEC Vice Chair, Kerry Tinkler FBEC Committee Member, Steve Hollingworth (BCC Assistant Director/Regulation and Enforcement) and Dawn Harding (BCC Bereavement Officer responsible for Brandwood End and Kings Norton Cemeteries) Great to see contractors working again on the chapels today. They are making sure the window boards are secure and ‘pigeon’ proof, and then giving them a new coat of paint!