You may wonder why we have included the above event in our National Cemeteries week, and why today? Maybe the date gives you a clue, as it is 107 years today since the Lusitania sank and on board was Reverend Canon Ernest Maxwell Phair- who  is buried in Brandwood End Cemetery. 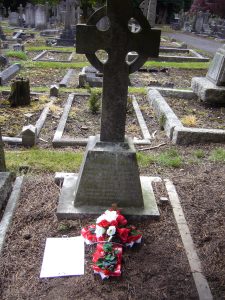 Follow the link below to find out who he was and why he was travelling on the Lusitania that day.

Todays story is sad, but unfortunately not an isolated incident during WW2. During the day of the 19th November 1940  no one could have foreseen what would happen overnight. It was another night of bombing in Birmingham but worse than most. Alfred Cope, a member of the AFS, and both of his twin sons, Stanley and John, lost their lives when a bomb fell in St Stephens Road Selly Park. Our thanks to BARRA, Doug Smith and  Lynda Peedle (Grand daughter) for their contributions.

For more information you can access our research via the link below in green. 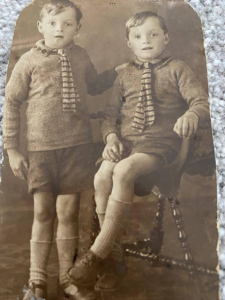 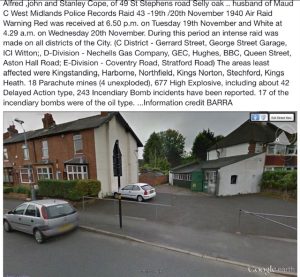 Sergeant-Major Charles Dawes died in 1932 aged 96. Todays information is short, but he definitely needs a mention. “The last Birmingham survivor of the Crimean War was buried with full military honours on
Saturday (6th August 1932) at Brandwood End Cemetery, Birmingham. Hundreds of
people lined the route of three miles from his home and there were several hundreds
more at the cemetery.
Hampshire Telegraph – Friday August 12th 1932.”

Charles was born in Upper Street, Tettenhall Regis, Wolverhampton, Staffordshire, and
baptised 25 October 1835. His father was James Dawes (a gardener from Penn) and his
mother was Elizabeth. He married Caroline Whyatt from Haslingfield, Cambridgeshire in
1867.
Two of his sons had Indian connection middle names – Albert Edward Shinwarrie Whyatt
Dawes and Charles William Gwalior Whyatt Dawes.

Firefighters Memorial Day will have been marked by a minutes silence at midday today to honour Firefighters who lost their lives in the line of duty.  Over 2300 such deaths are recorded.

Brandwood End is the resting place of Sydney Charles Tropman who was one of the above number.

As part of National Cemeteries Week we would like to highlight some of his story.

Our only public event in National Cemeteries week took place today as most of our information is on this web page or our facebook site. A dry but cloudy day meant that we had plenty of time to walk the route of our Heritage Trail and can I express my thanks to the participants who listened to my chat and came up with some searching questions. The trail starts opposite the Lodge on the main drive at the Friends noticeboard. For those that missed it , you can download a PDF of the walk below.
2021 HERITAGE WALK 2
It is wheelchair friendly, apart from one grave, as it is concentrated on the main drive and items of interest clearly visible from there.
Plan this trail into a sunny day and enjoy the peace, greenery, wildlife and history that surrounds you in Brandwood End.  Consider if you may like to join us on the Friend committee. There is so much of interest for everyone and we welcome anyone who may wish to pop along to meetings a few times before making a decision. As the Spring takes over from Winter the project to record the memorials and their inscriptions in Brandwood End continues.

This project, led by Caring for Gods Acre, has two parts to it at the moment. The first is to manually record the information and so far we have welcomed many volunteers to undertake this task. If you would like to get involved then you can sign up via this link.

The second part is to convert  this information into a digital record that can eventually be embedded in a map!  All very exciting. If you know your way around a computer key board, then maybe you could help with this very important task. Interested? Then sign up here.

Come along and help record the inscriptions on the headstones in Brandwood End. You can also learn what they really mean and how word styles have changed over the years.

Dates are now available for the whole of the summer but you do need to book a place as numbers are restricted. Once you take part in this event, organised by Caring for Gods Acre, you will want to come again.

These sessions are free, just book your place here. It was a pleasure to meet the Revd Tom Merry and his sister in Brandwood End today as they searched for family graves. Both had travelled from Gloucestershire and Worcestershire respectively and had spent an interesting morning investigating burial records to help locate several graves. They were both surprised to see the prominence of the family grave of their great grandfather William Adams, shared with one set of their grandparents.

William, known as Bill,  was a notable benefactor to the City of Birmingham, a county councillor, magistrate and chairman of Birmingham Football Club.

After his death in 1911 (and burial at Brandwood End) his house in Moseley called ‘Sorrento’ became a hospital for WW1 wounded and then later a well known local maternity hospital.

William was despatched from his home town of Sheffield to Birmingham, to establish a new branch of Refuge Assurance, a company founded by his father Henry Adams.

Whilst in the cemetery they were also able to locate 3 other family graves.  Our thanks for allowing The Friends to be part of this interesting investigation.

Not quite a ‘brick’ but certainly- in the wall…of the chapels.

We have Mark Brady of STONESET MEMORIAL MASONS to thank for bringing this foundation stone back to its original condition. Over the last 121 years the writing had become indistinct and difficult to read. Mark undertook this work as a ‘labour of love’ and I am sure you will agree that it now cuts a dash on the chapel wall. 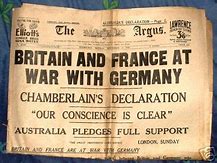