On Sunday 1st December we will be holding our last litter pick of 2019.

Please come along and support us. We have the litter pickers and the bags- we just need the volunteers. Meet at the Lodge on the main drive at 10am. Remember you will need stout footwear ! Lets hope the weather is dry for us this Wednesday 27th as we will be welcoming Birmingham Trees for Life and pupils from St Albans R C Primary School to plant yet another 10 trees in Brandwood End Cemetery. 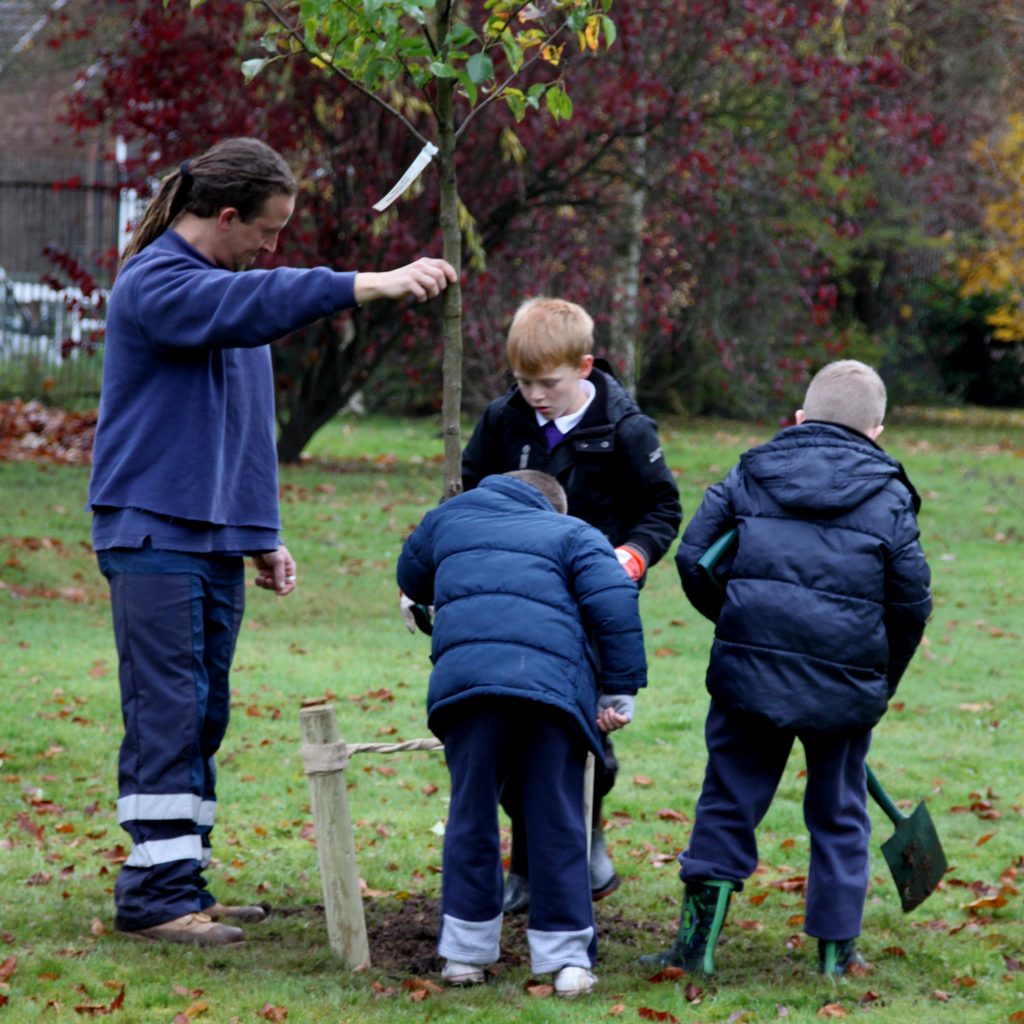 Last year we sadly lost a number of large Poplar Trees from one of our boundary areas but with the help of Birmingham Trees for Life we are slowly replacing them with more suitable species. 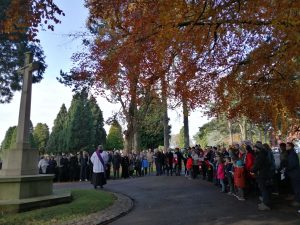 Deacon David Fairbotham gave a short thought provoking Service of Remembrance and the Wreath Laying was preceded by a Bugler and 2 minutes silence.

Everyone then processed down the main Drive to the WW1 Memorial, where further wreaths were laid.

Our thanks to everyone that attended this event. We have collected a few photographs via this link should you wish to see more. The Army made a start on the clearance of the Holly but the baton has been taken up by the Ground Staff !

This has been such a daunting task to undertake but spurred on by the inroads that ‘202’ made on one section Tony, Alan and John have now attacked the remaining Holly setters along the main drive. The result is amazing! Watch this site for updated ‘clearance’ photographs. Please arrive in time for a 10.50am start. The Service usually concludes by 11.15am.

We look forward to welcoming you all. Despite the damp and drizzle over 16 folks turned up to The Lodge at 11am yesterday to join BCC Park Ranger Dean Paul’s excellent 2 hour plus ‘tree and cemetery walk’. Combining his extensive knowledge of Brandwood Cemetery from his previous role as a member of the ground maintenance/grave team with his current role as a City Park Ranger for South Birmingham, Dean covered an wide range of fascinating and instructive topics.   I am sure that everyone who attended found the whole experience hugely instructive and worthwhile. Spotted on the walk was this industrious Squirrel’s dinner table!

Our thanks to Dean for his time. He hopes to do a further ‘walk’ when we have some Autumn colour so watch this site for the date.

“A Bridge Too Far”

In September 1944, after the victorious end of the Normandy campaign, Field Marshal Bernard Montgomery devised a daring operation to open the way to the Ruhr by seizing a bridgehead north of the Rhine, at Arnhem.

On September 17, Operation Market, the largest airborne and glider operation in history (five thousand aircraft) was carried out by three Allied airborne divisions. Operation Garden was the ground side in which the Thirtieth (British) Corps was to link up with the British First Airborne at Arnhem by thrusting north along a narrow corridor opened by the U.S. Eighty-second and 101st Airborne Divisions. Then, the remainder of British Second Army would rapidly assault the Ruhr, thus hastening the collapse of the Third Reich and likely ending the war in 1944.

Congestion and German resistance along the single narrow road to Nijmegen and Arnhem delayed the British ground advance. The attempt to relieve Arnhem failed even though Lieutenant Colonel John Frost’s gallant paratroopers held the northern end of the Arnhem Bridge against the Ninth SS Panzer Division for four days before finally being overrun and captured. Market-Garden was a military disaster during which the ground force was unable to breach the River Waal at Nijmegen in time to establish a bridgehead north of the Rhine in what became popularly known as “a bridge too far.” Of the ten thousand men who had landed at Arnhem, fourteen hundred were killed and over six thousand captured; only twenty-four hundred paratroopers safely crossed to the south bank of the Rhine in small rubber boats.

Though a costly failure and a disaster for the British 1st Airborne Division, the Battle for Arnhem today stands as an example of courage and endurance and one of the greatest feats of arms in the Second World War.   Arnhem has become a byword for the fighting spirit of the British people and has set a standard for the Parachute Regiment. As an indicator of the courage displayed by British forces, five Victoria Crosses were awarded – four of them posthumously.

We will remember them. We were very pleased to welcome members of the 96th Birmingham Scout Group, who helped with our September Litter Pick. They were joined by some of our usual supporters and it was great to see that we have some new ‘younger’ enthusiasts- or litter pickers in training!

Generally the cemetery was clear of obvious litter but we did manage 14 sacks of flower paper and shredded artificial flowers (Under hedges and behind grave stones). Can we remind you again to remove flower paper if possible and, if using artificial flowers, please make sure they are well secured not just popped in the display vases. The wind will blow these items away from the grave and animals (and grass cutting equipment) will shred them.

Whilst some of our members litter picked a few of us gave the top of the two hedges surrounding the Civilian Garden and the War Grave area a bit of a snip to smarten them up. They should have a good cut back as soon as they become dormant in the winter.

Our thanks again to everyone and we hope to see many of you again in December.