Sunday 13th October– a date for your diary to join Dean, the Park Ranger, on a Tree Walk around our beautiful cemetery. Find out more via this link. 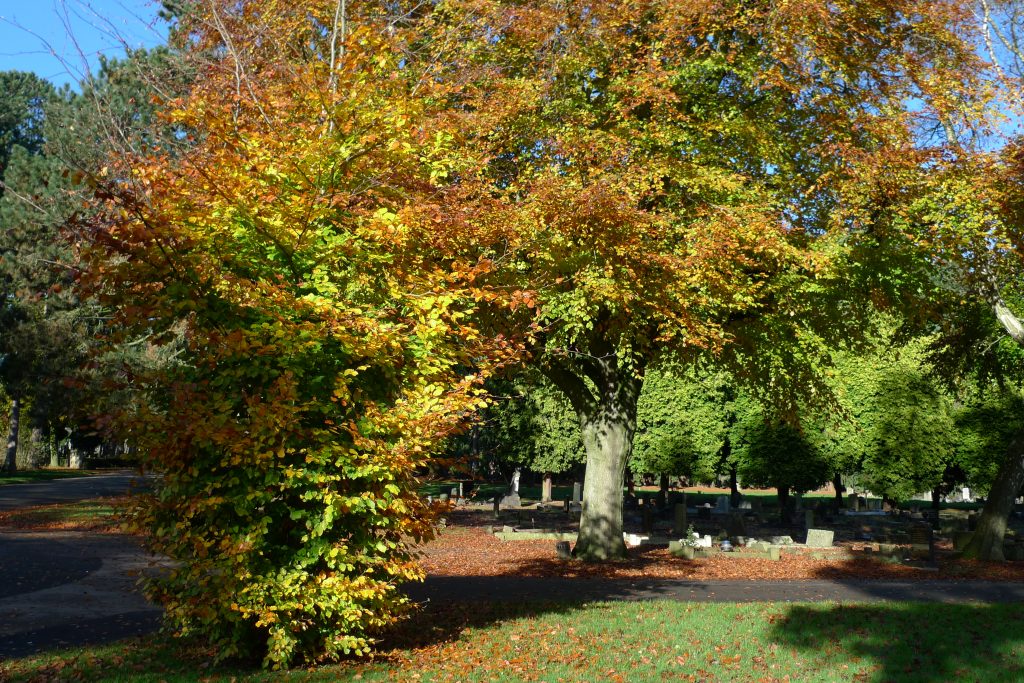 Who would believe that we are just about to enter Autumn!! Join the Friends for our AUTUMN LITTER PICK in Brandwood End Cemetery. Meet us on the main drive (opposite the Lodge) at 10am. (We finish officially at 11.30)- Saturday 7th September. Litter pickers and bags provided but we would recommend stout footwear and gloves as well as outer wear.

Come and enjoy this beautiful green open space, whilst helping to keep it litter free.

The photographs below, taken today, show how welcoming flowers can be to an area. The first shows the entrance to the now unused Lodge on the main drive. The second is a small area of the Civilian Garden of Remembrance. We need to get in and do a bit of weeding….but generally it looks lovely and we must thank the BCC grounds maintenance team for the excellent job they have done in reducing the hedge height and keeping it in check for us. St George’s mushrooms are so named as they are usually ready to pick from about St George’s Day, and it was with great joy that Carola, a member of our committee, stumbled across a specimen whilst refreshing our notice boards! The link below will tell you a little more about them and it appears that the ‘River Cottage’ Chef, is most partial to recipes including these edible mushrooms.

Remember never to pick and eat mushrooms/fungi unless you are accompanied by someone who knows which is which- as eating the wrong sort can be fatal!

This weekend was a special one for Brandwood End Cemetery as the Friends remember 2 events that happened 120 years ago. Brandwood End Cemetery was officially opened (there is a plaque on the wall of the West Chapel ) on Thursday 13th April 1899 by Mr. George Tallis, the Chairman of the Kings Norton Parish Council Local Cemetery Committee.

The photograph above shows the boulder (Provided by the Friends following a generous donation) marking one of the communal grave areas where the very first burial site is marked. If you look to the right as you pass the Cross of Sacrifice, very close to the Redwood Avenue, you will find a simple wooden stake. (Section C1 c/e)

The Friends, with help from Bereavement Service staff, have identified the grave of :-

Charles Downes – 5 years old – first burial in Brandwood End. The cause of death was ‘Diphtheria after 4 days’

His father, Walter William Downes was a Carpenter (journeyman) who was present at his little son’s death at 47 Runcorn Road, Balsall Heath on Tuesday 11th April 1899.   Charles was buried four days later on Saturday 15th April, and became the first burial in Brandwood End. We have, today, laid a small tribute with a few words, but hope to bring you more of the Downes Family history via a link in the next few days.

The minister who conducted the burial service was Revd Charles William Barnard, Vicar of St. Nicolas’ Kings Norton (1893-1909) in whose parish the Cemetery lay.

Birmingham Trees for Life and pupils of St Albans RC Primary school will be joining the Friends as we make a start on replacing the 64  trees that were recently felled adjacent to Sunderton Road and Broad Lane. Some time back, the Tree Officer had concerns for the 64 large Poplar trees that flanked the cemetery and towered over the newly built houses in Sunderton Road. His concerns were correct as when, in a large project, they were felled and showed that most of them were internally rotten and in danger of falling in high winds etc.

We were all in agreement that these trees needed to be replaced to maintain the tree stock in this beautiful Cemetery but we also agreed that more suitable trees should be found that would not shade out the properties that lie behind them but could also aid the reduction of ‘water run off’ that occurs in this area. How could we fund this project?

To the rescue came Birmingham Trees for Life. (A charity that are part of Birmingham Civic Society). They are funding the first 15 standard trees as part of what we hope will be an ongoing project.

Come along and help. Everyone welcome.

Gosh ! Where did 2018 go? Christmas is nearly upon us followed closely by the New Year. Can we take this moment to thank all of our supporters for showing an interest in our posts and taking the time to follow what FBEC have been doing in 2018.

We have had a very busy year holding our Heritage Open Day and then Remembrance, in this special year. Most of our time is taken up with research into the many interesting people buried in Brandwood End and trying to share their story with the wider community. Our special thanks to the relatives of several of those individuals that we highlighted, who then contacted us with additional information and precious photographs.

The Friends have also been pleased to welcome several groups to the Cemetery who have taken part in various themed walks.  This year we have also received several donations and many encouraging comments via this site and our Facebook page.

Next year is a special year for the Cemetery as it is the 120th anniversary of its official opening.     I am sure those of you that visit the cemetery will have noticed the new temporary roof on the chapel? This is a small step forward, so lets hope that 2019 is the year in which we manage a leap!! 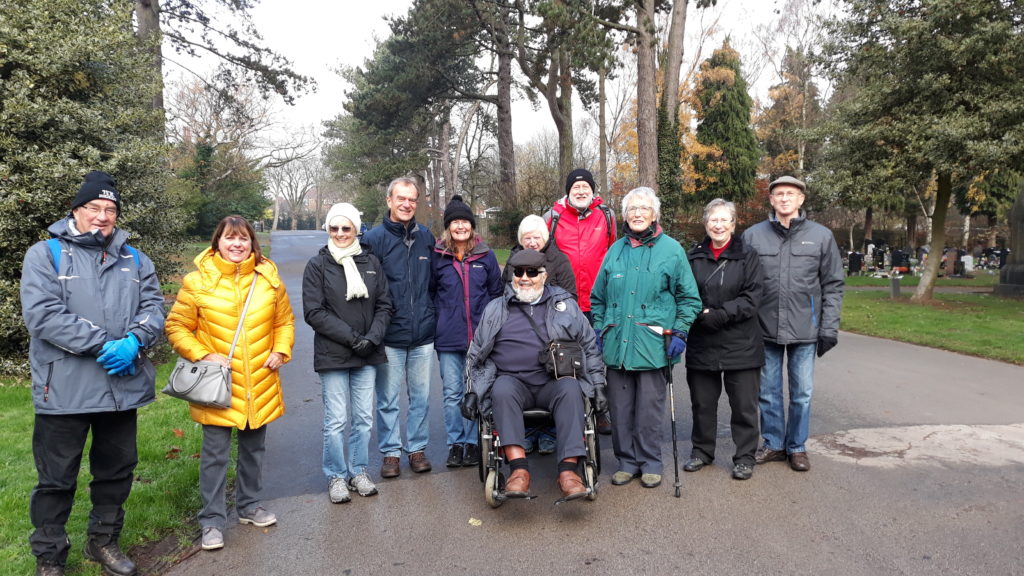 It was lovely to meet some of the members of the Blossomfield U3A  (Natural History, I think?) group in the Cemetery this morning. Such a shame that the sun only began to shine as we were leaving! Our thanks to their Organiser, Barbara, for giving the Friends a chance to explain some of the history of this magnificent green open space- its buildings, its trees and its connection with the people of Birmingham.

We every much hope that they will return and also spread the word to others who may have family buried here, or who just enjoy the peace and tranquillity that Brandwood End imparts to everyone who visits.

Over 150 people attended this years Service of Remembrance. Once again the atmosphere was enhanced by our Bugler but it was lovely to see many organisations represented, many of whom had several members there.

Our thanks to Deacon David Fairbotham, who conducts a short but thought provoking service and to the growing number of  people who attend. if you would like to see a few more photographs of this event, please follow this link.

We shall remember them. Just a few of the amazing Fungi on show in Brandwood End. Its only recently that scientists have begun to understand just how vital these are to the well being of trees, as they pass nutrients and information underground!