All members are invited to the Annual General Meeting of the Friends of Brandwood End Cemetery which is to be held on Thursday 14th April at 10.30am till 11.30am in the Conference Room at St Dunstans Church, Kingsfield Rd, Birmingham B14 7JN. As you enter from the main gate in Kingsfield Road the Conference Room is on the right. Copies of the Annual Report and the Audited Accounts will be presented and circulated to the members present. Following the meeting these will be posted on our website fbec.org.uk.

Under the rules, existing members of the Executive Committee will be offering themselves for re-election but we welcome enquiries from prospective new members. All nominees must be members of FBEC and nomination forms can be obtained from the Chairman and must be completed and submitted by 31st March 2016.

Any questions to be tabled at the AGM should be submitted in advance to the Chairman by telephone /email by 31st March 2016.-07811 393259 / friendsofbec@gmail.com

The Committee sincerely hopes that you will be able to join us for tea and cake and to learn of our successes to date and plans for the future. We work on your behalf and depend on your support.

This is the time of year where the damp weather means its fungi season in the Cemetery. You can always find lots of ground fungi but Carola 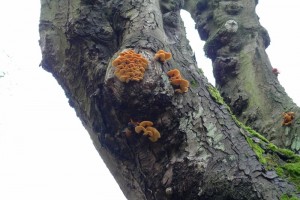 , a member of our committee, spotted and photographed this specimen of tree fungi! Next time you are in Brandwood End try looking up……you would be amazed what you can find.

As well as varied birds sitting quietly in the trees you can also see the remnants of their nests and several squirrel dray’s. Views across the cemetery are very different when the trees are devoid of leaves but our many evergreen trees mean that there is always a splash of colour.

Those of us that are lucky enough to live close to the cemetery can recommend a walk there in any season and any weather as nature always provides something to see.

This will be the last weekend in 2014 that the Friends will be holding a Litter Pick and clean up in the Cemetery. The details are as follows:- If Litter Picking is not up your street, we always have plenty of weeding to do under the hedges in the Civilian Garden of Remembrance. You will have to bring your own tools for this task.

Every year Barrie Simpson goes beyond the call of duty and as well as organising the placing of a poppy cross on every war grave within Brandwood End  he also creates a ‘poppy cross cemetery’. Every War Grave is represented by a cross in a grid pattern laid out on the grass of the Public Grave area adjacent to the Cross of Sacrifice. Every year we encourage pupils from the two schools that lie on either side of the cemetery to come and read the information that is posted nearby and it hopefully becomes a discussion point- especially in this significant year.

Our thanks go to the staff of Wates Construction for helping with the placing of crosses on graves and S. Gascoigne and Sons for their kind donation to the Royal British Legion Poppy Appeal on our behalf. 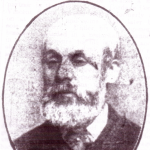 Explore the night with Brum Bats and the Ranger Service on a Bat walk through Jasmin fields Nature Reserve along the canal, through the cemetery to finish at Brandwood Pool.

All ages welcome but under 16’s must be supervised.You will need to bring a Powerful torch and wear outdoor clothing and sturdy footwear.

Friends of Brandwood End Cemetery joined other members of New Vision at an ‘Explore Jasmin Fields’ event last Saturday.  A similar event last summer was completely drowned out so we were dismayed when we started to set up in rain and wind! The wind was so strong that one or our gazebos briefly became a kite……but the wind soon dropped and the rain cleared and by starting time we had very acceptable weather. 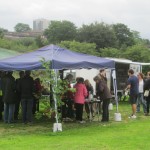 We were very pleased that the Lord Mayor and the Lady Mayoress came along to open the event and stayed most of the morning. The Ranger Service and the Friends of Jasmin Fields, supported by New Vision, had arranged a circular walk of the nature reserve, pond dipping, cake icing, badge making, bike repairs and advice on security by the Neighbourhood Policing Team. The event gave local groups, including FBEC, the opportunity to make residents more aware of their activities and to enlist members for future events. Everyone agreed to had been a real success and well worth the effort by the volunteers.

If you have an interest in any of the local groups, especially Friends of Brandwood End Cemetery, please contact us via this site and we will add you to our e mail list to be advised of anything happening in our local community group areas. We all need your support at our events and it is so good to see local people interested in any of our sites. Some time ago we reported the concern of members that the exit from the Broad Lane gate of the cemetery was potentially dangerous as there was no pavement and you stepped into fast moving traffic. FBEC  arranged with local Councillors to have the road marked outside both the public and the Jewish gates, to warn vehicles that there were  hidden exits within the hedge line. Following our request to the Cemetery Superintendent we are pleased to say that a warning sign has been placed close to the exit so all pedestrians are now aware of the danger. Our thanks go to those who drew this to our attention and also for the assistance of the local Councillor and Bereavements staff for addressing this issue

The Friends of Brandwood End Cemetery sponsored a ‘paver’ at All Saints/Kings Heath Village Square but were dismayed to find that there was a spelling error within the inscription. We are pleased to inform you that this has now been corrected and a new paver with the correct information is now in place.

Thank you All Saints!